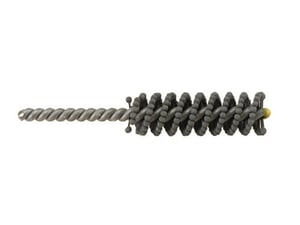 The Model 1917 Revolver is a six-shot .45 ACP caliber sidearm with moon clips for holding rimless cartridges in position. Star-shaped and made of thin metal, a moon clip works like a cartridge rim by setting the headspace for a chambered cartridge. M1917 revolvers made by Colt and Smith & Wesson were chambered for .45 ACP ammunition, but can also fire rimless .45 Auto Rim cartridges.

As M1917 owners understand, however, neither cartridge will work well in a chamber with a poor surface finish. Firearms manufacturing is a form of precision machining, but even new revolvers can have tool marks and other surface imperfections. Older handguns and revolvers or pistols that are fired frequently also require gun cleaning and firearms maintenance.

Gun Tools for Revolvers and Pistols

Flex-Hone® for Firearms tools are easy-to-use and require no special training or instruction. Self-centering and self-aligning to the bore, they feature abrasive globules that are bonded to flexible nylon filaments. BRM’s gunsmithing tools can be used with an electric drill, and have helped shooters solve surface finishing challenges with many different guns – including M1917 revolvers.

When a gunsmith in Arkansas read BRM’s blog entry, he shared his own story about using flexible hones to maintain a Model 1917 Colt .45 revolver. A client’s handgun “had been abused somewhere along its life,” the gunsmith explained, and “did not allow one chamber to accept a .45 Auto Rim or a .45 ACP moon clip to seat correctly.” Then a chamber reamer left tool marks that required removal.

That’s when the gunsmith used first a medium-grit flexible hone and then a fine-grit flexible hone to remove the tool marks and improve the chamber’s surface finish. After cleaning and reassembling the Model 1917 revolver, “all chambers took the rounds tested for fit”, he explained. Test firing was also a success, with no failures-to-eject (FTEs) and performance that was “clean and smooth”.

“Great tools,” the gunsmith told us while adding that the Flex-Hone for Firearms is “easy-to-use” and available not just for .45 caliber revolvers, but also for rifles and pistols. Cylinder hones are available for shotguns, too, as this downloadable brochure explains. “Thanks, Flex-Hone,” the gunsmith told BRM. “When you need to clean up those little problems, you have a great tool family to use.”

Have you tried using the Flex-Hone® for Firearms to maintain the bores of your revolvers, pistols, shotguns, or rifles? Which abrasive and grit types did you choose, and did you use BRM’s gunsmith tools in a handheld drill or other rotating spindle? We hope you’ll tell us your surface finishing success story, and share your knowledge with other gunsmiths and shooters.