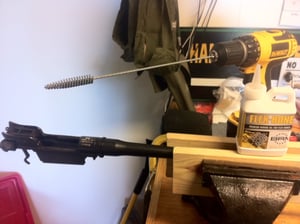 The U.S. Model of 1917 is a .30 caliber, breach-loading, bolt-action rifle modeled after the British P-17. Made in America by Winchester and the Remington Arms Co., the M1917 is often called the American Enfield in honor of its U.K. origins.

Gunsmiths and gun collectors sometimes disagree about whether the U.S. Rifle, Caliber .30, M1917 (Enfield) is a true P17, but smart shooters know that firearms maintenance is what’s really important when working with older rifles.

According to the U.S. War Department’s Basic Field Manual of 1942, the chamber of the M1917 Enfield rifle “must be cleaned as thoroughly as the bore” because “a rough chamber may cause shells to stick.” The Flex-Hone® tool from Brush Research Manufacturing (BRM) wasn’t invented back then, but we’d like to think it deserves a place in any gun manual’s “Care and Cleaning Section”. Ideal  for removing residue from chambers, the Flex-Hone® for Rifles is a durable and reliable gun brush.

That’s what a gun blogger called Garand Thumb learned last summer when his M1917 starting saving rounds because of ejection problems. While cleaning his Enfield rifle, the shooter discovered that the M1917’s chamber “looked a little rough” because of rust and residue. After trying unsuccessfully to “clean it up with a chamber brush”, the gun blogger ordered theFlex-Hone® for Firearms from Brush Research. Later, while updating his readers about his weapon, he exclaimed how “this works!!!!” and that his rifle’s rounds now “ejected like butter”.

After lubricating his rifle’s chamber with Flex-Hone® oil, Garand Thumb chucked the mandrel of the Flex-Hone® tool into his handheld DeWalt electric drill. With the receiver and the chamber clamped in a vice between two  wooden blocks, the amateur gunsmith honed the rifle chamber for about a minute. Later, as he explained to readers, “be careful not to overpolish if you decide to try this”.

The Flex-Hone® for Firearms is a surface finishing tool rather than a material removal tool, but that’s good advice from a satisfied shooter. As Garand Thumb exclaims, “I am excited that I finally found a solution!”