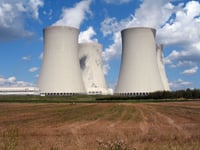 According to Dan Stoltz, a radiation protection supervisor, the nuclear power plant had been using abrasive blasting, but wanted a better mechanical decontamination method. Stoltz knew that automotive mechanics use Flex-Hone® tools to hone engine cylinders, and this led him to contact BRM. The Los Angeles, California company analyzed the nuclear power plant’s requirements and suggested several Flex-Hone® tools.

The nuclear power plant then equipped a test facility with large-diameter water pipes that had challenging surface conditions, but that weren’t radioactive. “After we started using the flexible hone,” Stoltz says, “we knew immediately it was going to work (and) that it was exactly what we were looking for.” BRM offered some additional suggestions, and the power plant began using Flex-Hone® tools in the field. 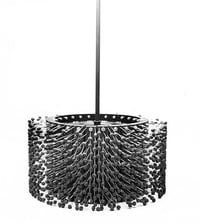 In the nuclear power industry, pipe decontamination is a significant expense. Before the power plant began using Flex-Hone® tools, a contractor needed a 14-hour window to perform the work. Some of these hours were dedicated to preparation and cleanup, but most were for removing the oxide layer. Once the contractor began using the Flex-Hone®, maintenance personnel could clean each pipe in just one hour.

Flexible honing also reduced the amount of radioactive waste that’s produced during nuclear pipe maintenance. Unlike other mechanical decontamination methods, the only abrasive that flexible honing uses is part of the Flex-Hone® tool itself. In addition to lowering disposal costs, less radioactive waste means less human exposure to these substances during cleanup.

BRM Flex-Hone® tools also helped the nuclear power plant meet several regulatory requirements. In the United States, the Nuclear Regulatory Commission (NRC) defines the minimum wall thickness for nuclear pipes. Because the Flex-Hone® tool removes only a small amount of metal from a cylinder's walls, expensive and time-consuming pipe replacements could be minimized.

BRM Flex-Hone® tools are available for any type or size of cylinder, and are the surface finishing tool of choice for applications ranging from automotive engines to nuclear pipes. Would you like to learn more about flexible honing? Then download the Flex-Hone Resource Guide today.