How to Deglaze Engine Cylinders 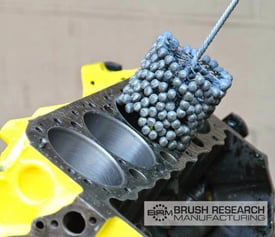 Motor oil is the lifeblood of your vehicle’s engine. Without proper lubrication, heat and friction can cause excessive engine wear. To keep your car or truck running at peak performance, the engine cylinders need an oil-retaining surface finish. In new engine blocks, the cylinder bores are honed to impart a series of oil-retaining grooves. Over time, however, the reciprocating movement of the pistons can polish the cylinder walls so that they have an overly-smooth finish that won’t hold the oil as effectively.

This cylinder wall glaze doesn’t just impede lubrication. It can also affect the performance of your piston rings, engine components that seal the combustion chamber, support heat transfer, and regulate oil consumption. During engine rebuilds then, mechanics use cylinder hones to break the glaze on cylinder walls. In addition to promoting proper lubrication, engine honing supports piston ring seating and sealing. Different honing tools are available, but what’s the right glaze breaker hone for your next engine rebuild? 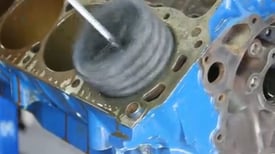 For bores that aren’t out-of-round or that require resizing, the Flex-Hone® tool from Brush Research Manufacturing (BRM) is the ideal solution for deglazing engine cylinders. Built with abrasive globules that are permanently laminated to flexible nylon filaments, the Flex-Hone® tool is self-centering and self-aligning to the bore. This makes BRM’s glaze breaker hone easier-to-use than a rigid hone, which may require careful setups and frequent adjustments during engine honing.

Like honing stones, flexible cylinder hones can be used with a handheld electric drill. Unlike a rigid hone, however, the Flex-Hone® isn’t designed for heavy-duty material removal. Rather, a flexible cylinder hone is designed for surface improvement, such as cylinder deglazing during engine rebuilds. For bores that require resizing or geometric corrections, use a rigid hone instead. Honing stones are also used for initial honing, such as after OEMs machine the cylinders into a new engine block. 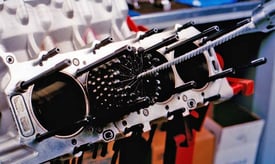 Flexible honing doesn’t require special training or instruction, but there are best practices to follow. For example, after chucking the Flex-Hone® tool in a handheld electric drill (or other rotating spindle), lubricate the tool generously. Rotate the tool prior to entering the cylinder, and avoid over-honing. Remember, too, that flexible hones are low RPM tools. As a rule, specific RPMs are a function of tool diameter. Smaller hones run at faster speeds. Larger hones run at slower speeds.

The Flex-Hone® Resource Guide provides general speed ranges, but machine trials may be needed to verify your parameters. This technical publication from BRM also contains guidelines for stroke rate, which is a function of tool diameter, stroke length, and the desired cross-hatch angle. As a rule, higher crosshatch angles require faster stroke rates. Typically, the optimum cross-hatch angle is 45° as measured from the deck surface. To promote oil retention, the cross-hatch angle should be consistent and neither too steep nor too shallow.

When it’s time for your next engine rebuild, get all of the facts – and then get started. To deglaze engine cylinders that aren’t out-of-round or that require resizing, the BRM Flex-Hone® tools is the industry standard. To learn more, download the Flex-Hone® Resource Guide.